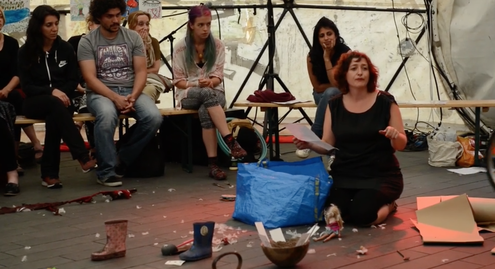 Lieu de Vie
In 2016, Pan Intercultural Arts was invited by Good Chance Theatre to deliver a week of drama workshops for the residents of the Calais Jungle. When we returned to the UK we struggled to find even basic language to describe this experience to family, friends and colleagues. Over the following months we began a process of creatively disseminating this to a wider field. From workshops with students and the public, to collecting contemplations (art work, objects, soundscapes, spoken word, film) from 18 other volunteers who went to work there into an installation called Make/Shift.
This piece was my response to the brutal bulldozing of half of the camp. After that event we returned to Calais and I collected objects that I found amongst the debris. It was first presented at the Encampment event at Southbank Centre in August 2016.
Listen here/ watch a video reportage here.
​